Six men sit around a table, each one a couple mistakes away from returning to prison.

ST. LOUIS – Curtis Ware survived a gunshot to the head for the second time last year.

The first one sent him into a coma for several months. Now, Ware walks into the Eagleton Courthouse with a limp and a bucket hat.

Ware and four other ex-convicts sit around a table, trading off stories of their past, supervised by Clark Porter, program support specialist. This group gathered in the St. Louis courthouse is part of Project Redirect.

Project Redirect is an intensive supervision probation program. Porter and Probation Officer Lisa White run the federal program which lasts anywhere from 60 to 90 days. They focus on cognitive therapy, drug treatment therapy, recreation at the YMCA and any other personal needs of each individual.

“[We] get them out of that environment and slow them down,” Porter said.

Porter said men in the program each have different personal situations the program caters towards. One member does not have a stable bed to sleep in, while others, like Shawn Torrence, work to avoid falling back into their former gang activity.

Torrence acknowledged he would never ‘get out’ of the gang because the members are the friends he grew up with. However, he does see a difference in staying friends and joining in the group’s activities.

“I got homeboys that’s with the shit, and I love them, but from a distance, though,” Torrence said.

An easel pad sits in the corner of the room, etched with rules like “No cursing at anyone” and “What is said in here stays in here.” These rules regulate the atmosphere of the meeting.

Porter said that during a regular probation sentence, he checks in to the probationer’s house maybe once every two months. This groups meets 16 hours a week, five days a week.

The men talk about the difference between state probation and Project Redirect. There is unanimous agreement that state probation provided more leniency than the federal program.

Project Redirect’s intensive approach allows for greater supervision of the program’s members. Porter said it is not easy, but it is necessary.

“I ain’t finna keep getting in trouble [with my friends],” Torrence said. “I got kids, I got bills. I like freedom. I like women, I’m tired of looking at men all day.”

A Shot in the Dark

A Week of Gun Violence

A burned-down house in St. Louis is left standing on its framework.

Erica Jones poses next to her daughter’s memorial stone. 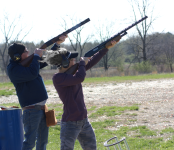